The parties have chosen the G20 Investment Summit in Berlin as the setting for signing their Memorandum on 30 October relative to the construction of a new gas-fired power plant in Lomé, Togo. 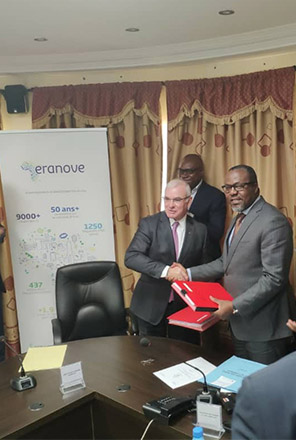 This agreement fits in perfectly with the spirit of the Compact with Africa, an initiative launched in June 2017 at the time of the G20 summit in Hamburg, whose goal is to improve the overall business conditions in Africa (macro-economic, entrepreneurship, financial), in order to boost the socio-economic development of the signatory countries. This initiative is open to all African countries that are keen to sustainably improve their attractiveness for foreign businesses and investors. At present, the movement counts twelve member-countries: Benin, Burkina Faso, Egypt, Ethiopia, Ghana, Guinea, Ivory Coast, Morocco, Rwanda, Senegal, Togo and Tunisia.

Compact with Africa was the scene of the signing of a memorandum by Eranove, the pan-African industrial group, TSK the builder of industrial installations and EPC, and Siemens in the presence of His Excellency Mr Faure Gnassingbé, President of the Republic of Togo, for the development of Kékéli Efficient Power, the country’s first gas-fired combined cycle power plant. It will be located in Lomé.

Eranove, TSK and Siemens are committed to making a great step forwards in the area of environmentally friendly and financially accessible energy production, thus meeting the needs of the Republic of Togo.

Togo does not currently have a gas supply, with the exception of the distribution of gas cylinders for meeting domestic needs and the requirements of other small-scale consumers. The existing electricity generation installations are essentially based on diesel or heavy fuel oil powered engines, with a far lower performance and a non-negligible environmental impact. The arrival of large amounts of gas in Togo will not only benefit electricity generation, but also other industries which will be able to boost their development (chemical, metallurgical, food industries, etc.).

Siemens will play a key role in the implementation of this ambitious project, as it will be supplying the two turbines, one of which is gas-powered (SGT-800), and the other steam-powered (SST-200). They will be able to produce about 65 megawatts, covering around 30% of the current local energy needs. Thanks to its flexible load changes, this power station will contribute to stabilising the grid in Togo, while making it easier to integrate renewables into the grid.

Gas Turbine Combined Cycle Power Plants are the most efficient source of thermal power in the world. The Kékéli project also provides proof that using Siemens technologies allows the countries of Central and West Africa to access affordable energy.

The partners are committed to ensuring the power plant’s long-term maintenance with a view to guaranteeing a reliable power supply for the people of Togo. They will also be involved in the development of local skills for the management of the power station’s operations and maintenance so that, at term, it will be entirely run and managed by Togolese staff.

“We are delighted and very proud to be contributing to the national strategy and accomplishment of the National Development Plan by developing this new electricity generation unit at the sides of the Republic of Togo, and we would like to thank the country’s authorities for the trust they have placed in us. Thanks to its acknowledged expertise and deep roots in Africa, the Eranove group has never ceased to seek to develop high-performance infrastructure projects that are suited to the continent. This project is the perfect illustration of the model that we want to promote to take up the challenge of access to electricity and water in Africa.”, explains Marc Albérola, Chief Executive Officer Eranove group.

“This structurally and strategically important project addresses the Togolese government’s twofold determination to promote its national economy and meet the ever-growing demand for electricity. This highly efficient power plant will therefore be at the service of the development of Togo as a whole, and will make it possible not only to supply additional electricity for the equivalent of 263,000 Togolese homes, but also to stabilise the grid and integrate renewables into it. Furthermore, with our partners, we want to support the sustainable development and anchor skills at the local level through training partnerships. A new energy concept for Africa that is reliable, efficient and sustainable for the population.” emphasises André Bouffiou, CEO Siemens Belgium-Luxembourg, North, West and Central Africa..

“We are very proud and more than happy to have been awarded this important project in The Republic of Togo, a country where we have found great people and impressive opportunities to work together with local companies and share our knowledge and technology with them. We are also delighted to have a customer as ERANOVE a company that is contributing to improve the energy infrastructures and the standards of living in different countries in Africa. In this project, we are working jointly with our long term partner Siemens and for sure we will achieve a very successful project as we have done together in other countries as Ivory Coast, Bolivia, Bangladesh, Spain, South Africa, Morocco or Kuwait.”, says Joaquín García Rico, CEO TSK.