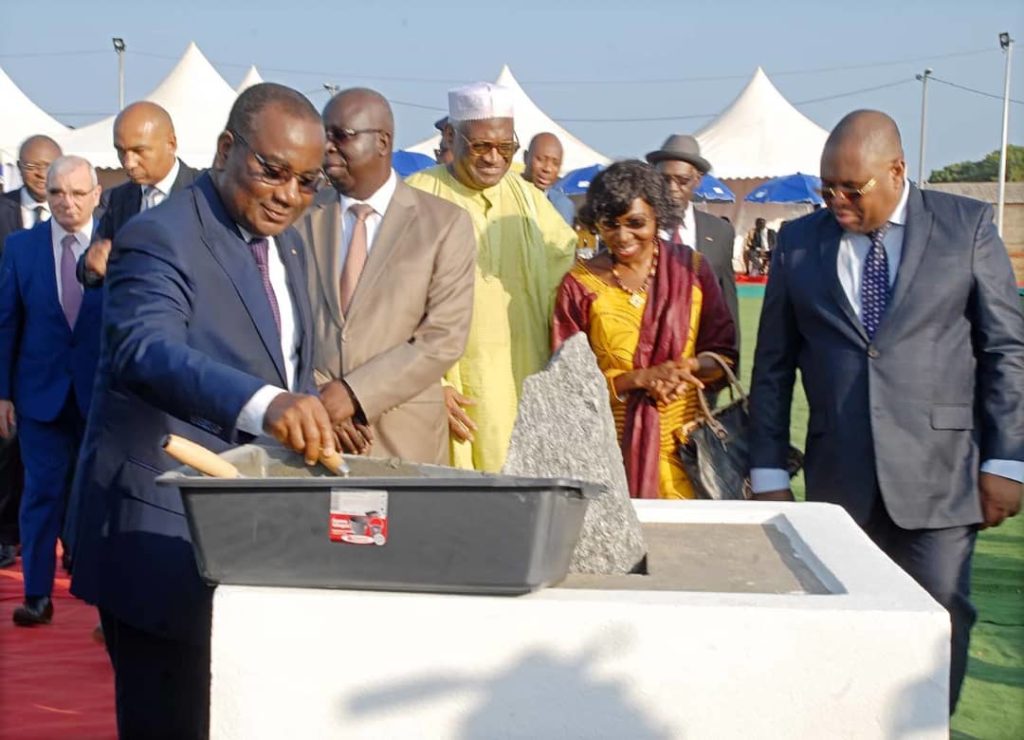 The Prime Minister of the Togolese Republic, Mr. Komi Selom Klassou, laying down the first stone of the next Kékéli power station. ©Eranove
de Kékéli. © Eranove

Under the distinguished patronage of His Excellency Mr Faure Essozimna Gnassingbé, President of the Togolese Republic, Mr Komi Sélom Klassou, Prime Minister of the Togolese Republic, Mr Vincent Le Guennou, Chairman of the Board of Directors of Eranove and Co-CEO of Emerging Capital Partners, as well as Mr Marc Albérola, General Director of the pan-African industrial group Eranove, and Mr Mansour Touré Tia, General Director of Kékéli Efficient Power, the first stone was laid of the future power station of Kékéli (Kékéli meaning “daybreak” in the Mina language) in June 12th, which will be located in the port area of Lomé.

This ceremony took place in record time for projects of this complexity, following the signing, on October 23, 2018, of the electricity production concession agreement for the design, financing, construction, launch, operation and maintenance of the future power station.

The laying of the first stone, which was organised to coincide with the Togo – European Union Economic Forum currently taking place in Lomé, is a perfect illustration of the concrete achievements of a solid partnership, bringing a European consortium together around the Eranove group and the Togolese Republic presented at Compact with Africa in Berlin in November 2018. German group Siemens will provide the turbines and the technology, and Spanish group Grupo TSK (EPC) will carry out the construction work. In terms of financing, the West-African Development Bank (BOAD) and the pan-African banking group Oragroup have led the mobilisation in CFA francs, which has helped to intensify and revitalise the booming financial market of the region. The Eranove group will develop and, subsequently, will operate and maintain this power station through its Togolese subsidiary Kékéli Efficient Power.

With an installed capacity of 65 MW, the Kékéli thermal power station will use combined cycle technology and provide additional electricity sufficient to power more than 250,000 Togolese homes. This technology is particularly useful in enabling electricity production to be ramped up without increasing gas consumption, while limiting CO2 emissions into the atmosphere.

“Under the authority of His Excellency Mr Faure Essozimna Gnassingbé, we are determined to have the Kékéli power station producing its first megawatts in 2020. The laying of the first stone eight months after the signing of the concession agreement is a very clear indication of the determination of the Head of State and Government. We are pleased and satisfied that the Eranove group has kept this schedule, which demonstrates the strength of our partnership,” says Marc Dèdèriwè Abli-Bidamon, Minister of Mines and Energy.

The development of the Kékéli Efficient Power station in Togo marks an important phase in the development of the pan-African industrial group Eranove, which is already operating at 1250 MW of production capacity and is currently developing projects aimed at supplying the continent with 1000 MW.

“This ceremony marks a symbolic and important phase in the advancement of this project. We are very pleased and proud to contribute to the national strategy and realisation of the National Development Plan by developing this new electrical power production unit alongside the Togolese Republic. We thank the authorities of the country and our partners Siemens and TSK for their confidence and continued commitment,” explains Marc Albérola, General Director of the Eranove group.

Through its recognised expertise and experience in Africa, the Eranove group develops high-performance, growth-generating projects, which are adapted to the local and regional environment, while forging partnerships with international stakeholders. The Togolese State will be a joint shareholder in the power station by way of an equity investment from the Togo Invest sovereign wealth fund. “This project is a perfect illustration of the model we wish to promote in order to address the issue of access to electricity and water in Africa”, concludes Marc Albérola.

About the Eranove Group
The Eranove industrial group is a leading pan-African stakeholder in public services management and in electricity and drinking water production.
The Eranove group has been present in Côte d’Ivoire for several decades (SODECI, CIE, CIPREL, Awale, Smart Energy), in Senegal (SDE) since 1996, and is developing exclusive infrastructure projects in Mali, Togo, Gabon, Madagascar and Côte d’Ivoire.
With a turnover of 597 million euros, 455 million m3 of drinking water produced, an operating electrical production capacity of 1250 MW and over 1000 MW in development, the Eranove group employs over 9000 staff, putting their skills and know-how at the service of 2.2 million electricity customers and 1.9 million water customers (2018 figures).
As a responsible stakeholder, through its subsidiaries, the group is fully committed to CSR (Corporate Social Responsibility) issues and to the international standards ISO 9001 on quality, ISO 45001 on health and safety and ISO 140001 on the environment.
The majority shareholder of the Eranove group is ECP (Emerging Capital Partners), a Pan-African leader in capital investment.
http://www.eranove.com